The Fierce Girl's Guide to Finance

Get your shit together with money 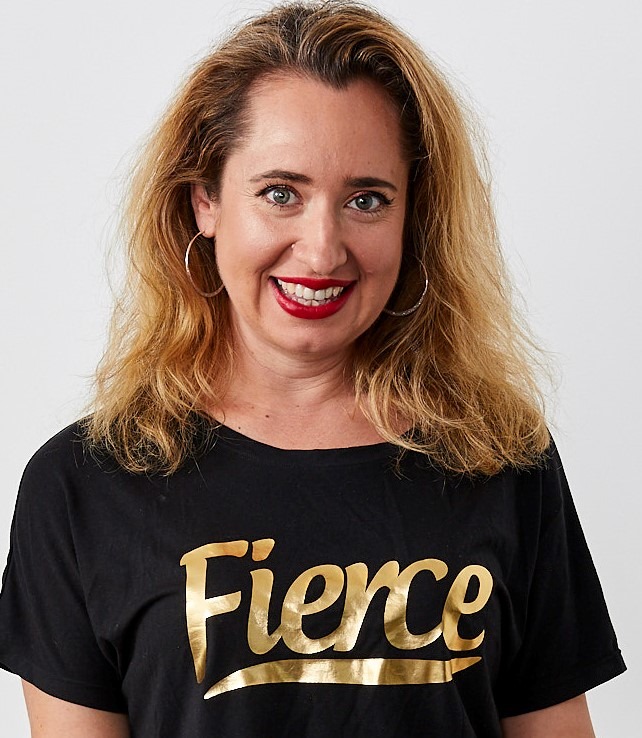 Do you ever do that in your work emails? Start the subject line with PLEASE READ?

Nah, me either. Would never be that desperate. Of course. Who would even?

Anyway, can I please take a few minutes of your time to tell you some cool things that have happened since that time I quit my job.

If you’re in Sydney, (pretty) please come along to this super affordable event on 5 March to hear about how to get started with investing. It will be informal, feature women who I think are amazing but super relatable, and there will be WINE. All for $22!

All the details and tickets are here: Make Your Pay Slay All Day: get started with investing

The hardest thing about writing for Mamamia is that every time I go to the website, I get sucked into things like Married at First Sight recaps (which are hilarious).

However, I did write a useful piece you might enjoy:

From ‘what is a share’ to how to invest: 7 questions you’re afraid to ask a financial advisor, answered. Click here to read it.

I also went on a bit of a rant over at Yahoo Finance, explaining: Three money mistakes women make all the time. (Hot tip, it’s not buying too many lattes). Click here to read it.

Yep, from shameless food prep photos to ‘save-and-share’ memes, the new Insta page is where it’s at, ladies!

Just head on over to https://www.instagram.com/fiercegirlfinance/ and behold my amazing design skills! (If by amazing you mean barely adequate). 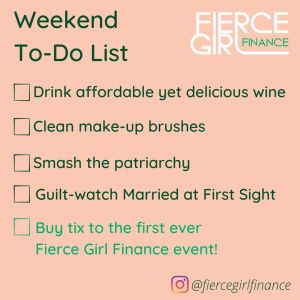 To celebrate Valentine’s Day (well, distract myself), I scripted, filmed, edited and posted a video on IGTV and Facebook. Honestly, I impressed the hell out of myself and am legit baffled about how I could possibly still be single.

Anyway, here it is. (I promise I’ll get better with practise).

But wait, there’s more! I know right, I’m on fire.

You can see the new brand colours and logo on my Insta page.

In the background, I’m beavering away on a new website, which is going to be gorgeous and actually done by professionals (not me and a Canva template). So, stay tuned for that.

I need your help … please

Fierce Girl Finance is finding its feet again. After a couple of years of enforced anonymity, I am finally able to build it into the platform I want it to be.

So, how can you help?

That’s all for now. Take care and stay fierce babes!

Wanna know how I managed to spend three weeks swanning around New York City last year? I lived with my amazing friend Gigi, who is a legit Manhattan property owner.

Not only is she a great friend for letting me stay there, she is a certified Fierce Girl.

Nine years ago, Gigi packed up, left Sydney and made a life in the Big Apple. And while she’s had lots of fun times and cool experiences, she’s also been really sensible with money.

We started chatting about some of the ways we’ve both achieved our financial independence and there was so much gold, I’ve captured it all in one post. Please enjoy Gigi’s Guide to Life & Money.

When we started our chat, I was asking for Gigi’s best ‘tight-arse tips’.

But she pointed out that’s not the right way to frame it.  “It’s the same way I don’t like healthy eating being framed as a diet. To me, these are tips for how to live a financially healthy life.

“Not buying a flat white every day isn’t being a tight arse, it’s saying ‘I would prefer to do something else with that $100/month’. Same with not spending money on make-up, bringing lunch everyday or eating less meat (though I started doing this for environmental reasons, then calorie reasons, then money reasons).”

She explains that it’s not just about cutting costs, but redeploying the savings you make

“And don’t think that people who spend a lot on something big are always spending that much. For me, the way to have a guilt-free big Saturday night is to not buy lunch and coffee during the week.” (Can confirm: Gigi never tries to avoid buying a round at the bar).

This is basically the ethos behind Mindful Spending, which I have written about here.

“Having one of something will make you happy, but having multiples of something won’t multiply your happiness. True with eating treats and true with buying things.”

Side note: Gigi decided a couple of years ago to lose some weight that had crept on during her party years in New York. She’s done an amazing job of losing it in a healthy, sustainable way. We both agree there are many parallels between healthy eating and healthy finances.

Anyway, she had this insight from someone in the Reddit weight-loss group.

“They pointed out that a biscuit/cupcake/icecream can be amazing but eating more of it won’t make it more amazing. It’ll never taste as good as that first bite. Something about it really resonated with me”.

Having just done a major clear-out of my wardrobe, I agree this is true. No more sassy slogan t-shirts for me.

Ah, see what I did there?

Puns aside, planning healthy meals and bringing a salad to work every day were easy wins for Gigi on both the calorie-cutting and saving front.

“Meal planning means you don’t buy random stuff you don’t need, and don’t waste it. One thing that helps is learning to love leftovers. Be ok with eating the same thing four days in a row.”

I know people who say ‘oh no, I don’t like leftovers’ blah blah. I say to those people, toughen up: it’s all in your mind. Humans evolved by eating the same animals and plants over and over, and you can too. (Admittedly, by day 4 it gets old. But you can definitely do 3 days)

Anyway, if you want to get better at meal planning, I have your back! Here’s my guide.

Gigi crystallised this for me a while back. If you’re going out on the town, don’t be lazy – take public transport there. Then you can give yourself a leave pass to get an Uber home.

Similarly, try and start the night at your house (or a friend’s) with a good bottle of wine or two. That way you can probably have some cheap snacks as well. I know it sounds suspiciously like the pre-loading you did when you were 19 years old. But this is the adult version, with a nice Pinot Grigio, not Smirnoff Black.

“Something I think is a great habit is to look at your spending and savings regularly. I log in to online banking and go through my spending twice a week, just out of habit. It shocks me when I hear that not everyone does that”.

There are two advantages to this: it provides a reality check if your spendy self is getting a bit busy; and you notice any unusual charges that might be fraud.

I also have notifications on my banking app (Macquarie) every time I make a transaction. As the world has become a tap-and-go free-for-all, that reminder makes me think twice about where my cash is going.

Sounds revolutionary huh? But think – honestly – about the number of times you go to stuff without really being interested.

Gigi’s actual words were: “Can ‘just say no to weddings you don’t want to go’ to be a tip?” I say yes. She figures: “If you care so little about it that you don’t want to be there, then the bride/groom probably won’t miss you”.

One thing that’s become outrageously expensive are hen’s and buck’s parties. Back in the olden days (pre-Instagram), it was a modest affair like a dinner, a club and maybe a stripper. But these days it’s easy to drop $500 on one event. WTAF?

So while we aren’t trying to ruin your friendships, we would suggest that just because you’re asked to do something – from dinners through to hen’s parties – doesn’t mean you have to.

This is Gigi’s final tip. “Like, go a month without buying anything”.

I know, she’s no Carrie Bradshaw, right? (She is, in fact, a self-declared Miranda).